The Summer Institute for Computational Social Science at Helsinki (or, SICSS Helsinki for short) was a two-week intensive course to provide perspectives towards computational social sciences and its tools. During the first week, we organized lectures and learning activities on topics such as human-computation, survey techniques and text mining. 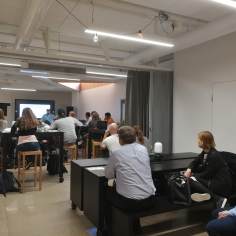 The second week of summer institute allowed participants to try out these new tools and methods in group projects. The group projects were self-organized based on the interests and motivations by the SICSS participants – a total of four groups emerged. Here are the projects, as explained by the groups themselves:

We have previously performed a qualitative topic analysis of interview data from 11 Baltic salmon fishery stakeholders. The purpose of these interviews was to develop an understanding of the potential cause and effect relationships between salmon, climate change, and society. We use topic modelling to validate the topics we have already defined via qualitative analysis and compare and contrast the finding between the two methods.

We are trying to find opinion changers in the discussions below the posts of news sites on Facebook. We will compare BBC, NYT, TRT World, and Al Jazeera by focusing on Turkish Elections of 2018.

A Semantic Map of Measurement Tools in Psychology

Our project studies how popular perceptions of recidivism risk align with predictions from criminal justice algorithm, COMPAS. We examine the database containing demographics, criminal history, jail and prison time, and COMPAS risk scores for 7214 defendants from Broward County, Florida, as well as the data that were collected using Mechanical Turk.

Altogether, these projects reflect in how computational social science research and approaches can be used to study various social and computer sciences questions. The first group focused on the methodological investigation of computational methods themselves, whereas the third group used computational methods to address methodological problems outside the field. The second group examined traditional questions addressed previously by communication and media studies people and political scientists, while the last group engaged into questions mostly asked by computer scientists addressing fairness, but increasingly also by sociologists through critical algorithm studies.

The challenge of SICSS program is that one week is extremely short time for conducting a research project of any kind. Quite often the projects also addressed topics where the groups had divergence knowledge on previous or related work – thus making it sometimes hard to pinpoint what is the research question and its driving motivations. While it can be debated if such aspects are required in (computational) social science research, I find these important. The short time span, combined with the novelty of computational tools to many participants, seemed to shift the balance more towards addressing all the coolness of computational methods, not the research question.

However, I think many groups acknowledged this after their initial one-week rush through the project stages: research design, data collection, analysis and interpretation. I know that at least one team is continuing to work on the project and is revisiting many of the early stages in their continued efforts.

I will publish a more full-length consideration of the SICSS Helsinki at a later time.

Following the week in Tvärminne, we wanted to continue supporting networking among participants. We had different evening activities, such as visiting Sompasauna or Suomenlinna, decided for each day. However, the foremost interesting one was the visit to Futurice, a Finnish software and digitalization consulting company.

At Futurice, we were greeted by Momo the robot. This robot has been built to help autistic children learn how to communicate together with experts from the healthcare sector. We saw videos of the robot being used in speech therapy sessions and heard what is under the hood: what problems emerged and how those were tackled.

I hope that I was not the only one considering what kind of potential there is to study human interaction in the future: what kind of new setups could we easily produce by using robots ready for reparation and exact replication? Could we reduce some bias in interview studies caused by having a human interviewer, and interestingly, what new biases emerge due to the human-robot interaction?

We thank the generous financial support from the Russell Sage Foundation, the Alfred P. Sloan Foundation as well as from the Helsinki Institute for Information Technology HIIT, which allowed organization of this event.