We believe that all social research must include the digital, but at the same time we must study the specificities of digital life: in what ways does the digital affect the social? How does the digitalization of everyday life, consumption and work affect our ways of life? On the other hand, Big Data and Computational Social Science are shaping social research, but are largely discussed by non-sociologists. With great data and method opportunities come some problems as well: how to get data scientists and social scientists to discuss with and understand each other, or should we rather teach digital methods to sociologists and sociological thinking to data scientists?

Our participants provided some preliminary answers to these questions. Many papers touched on the topic of whether ‘digitalization’ or ‘the digital’ is something that should be studied as is; ie. is ‘the digital’ actually something new or is it just another medium through which the same social structures, patterns and behaviour take place that used to, before ‘digitalization’, so to speak. To some extent, both are true, but in different cases and situations.

In Veikko Eranti‘s presentation on citizen participation projects online and offline, largely the same things are happening in both media. Getting citizens to participate more has been a primary objective for many Western polities recently, and efforts have included both offline forms of participation (such as participatory budgeting) and online initiatives (such as online citizens’ initiative portals). But both have their caveats: if the initiative is designed to bolster tokenistic representation on everyday matters without true potential for change in any structures, what we get is citizens complaining on mundane issues rather than any meaningful participation(s). 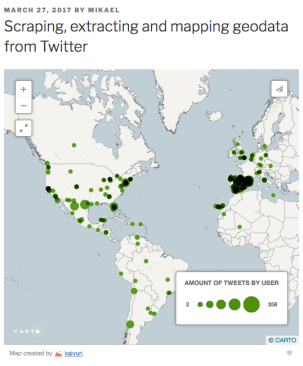 But Mikael Brunila‘s presentation on the online spreading of the Soldiers of Odin extreme right brand (of which there is a great blog post here!) shows that the digital and the physical not always go hand in hand: something digital might not reflect something physical, in terms of political action. Still, online activism is not just ‘clicktivism’: spread of radicalist ideas does have real consequences whether or not they are accompanied by ‘boots on the ground’.

And Zhen Im‘s paper shows that digitalization has some very concrete structural societal effects in the shape of creating widespread economic and cultural precarity which partly explains the surge of the Western populist radical right (a thesis of ‘digitalization losers’ complementing that of ‘globalization losers’).

Moreover, Salla-Maaria Laaksonen‘s work provides insight into how digital tools offer new methods of mobilization for anti-racist social movements as well, which may use social media to spread a ‘carnevalization’ of a physical event (an anti-immigrant street patrol confronted by humoristic ‘clown patrols’, the ‘Loldiers of Odin’). These tools for social movement mobilization are so concrete that state actors sometimes feel they have to intervene, as Markku Lonkila‘s presentation stated in the case of Russian political opposition and direct state repression that was directed against it. And they are used by a multiplicity of political actors: the logic of hybrid media also allows anti-immigration activists to question ‘official’ truth narratives and produce ‘counterknowledge’, ‘alternative facts’ and ‘post-truth politics’, as analysed by Tuukka Ylä-Anttila, by combining topic modeling with interpretive frame analysis.

Also in regards to corporate use of individuals’ data, not just political actors, citizens are reacting to perceived misuse of their data and claiming ownership of that data, as Tuukka Lehtiniemi‘s paper assessed. And while studying these partly old, partly new phenomena, there are also new ethical challenges we have to take into account, like Aleksi Hupli argued.

All in all, we hope that both taking into account the digitalization of society and usage of digital methods will become more and more self-evident in sociology rather than a curiosity. While they are distinct phenomena, they are driven by same societal changes, which should be understood in all social research; rather than a separate ‘sub-field’ of digital or computational sociology.